Disneyland’s Diamond Celebration: Looking Back at the Beginning 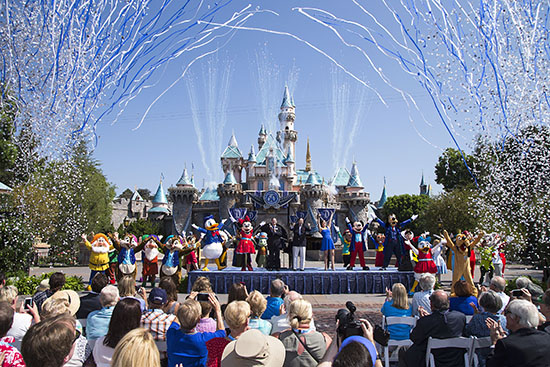 The Disneyland Resort’s 60th Diamond Anniversary is reaching its conclusion. For the last 15 months, the Diamond Celebration has dazzled the Disneyland Resort with new entertainment, decorations, merchandise, and even food! Most importantly, it has made dazzling memories for the countless guests that have come through its gates during this special celebration.

As we have now reached the final day of Disneyland’s Diamond Celebration I thought it would be fun to go back and look at the beginning. The Diamond Celebration officially began at the Disneyland Resort on May 22, 2015 with a 24-hour celebration. For those of us in the working media though, the 24-hour day would actually be the culmination of a couple day event that showcased all that was about to be unveiled to the public on May 22nd.

World of Color – Celebrate! was the first thing to be unveiled to the press. With a completely new storyline and many new magical effects, Celebrate! was introduced by Neil Patrick Harris, Disney Parks and Resorts Chairman Bob Chapek, and Mickey Mouse. Following this introduction, World of Color – Celebrate! had its world premiere. Nothing will ever replace the original World of Color in my heart, but this was a magical evening. As I sit here reminiscing about it 15 months later, I am reminded of the thrill that happened during the Star Wars section as we saw favorite characters and our favorite ship zoom around Paradise Bay! There were some other beautiful moments as this show shared Disney history in a magical way that only Disney can do. It was definitely an honor to be at this event. It was a joy to be able to be able to share it with colleagues who have become dear friends through the years, because of events like these.

Here are my reactions to the world premiere of World of Color – Celebrate! with my good friend Lisa Robertson from Babes in Disneyland: The following evening was spent in Disneyland for the unveiling of the Disney Paint the Night Parade and Disneyland Forever. The evening began with a fantastic meal along the Rivers of America where we also were able to meet Mickey and his friends in their brand new outfits for the Diamond Celebration. The Mark Twain floated out from us on the Rivers of America with live music on her bow as we ate our dinner. It was a beautiful evening and it would be very hard to ask for a more ideal setting.

Following dinner, we were moved to the Hub and Main Street, USA to see Disneyland’s newest nighttime offerings. They were introduced by Bob Iger and then the magic was unleashed.

First, Paint the Night made its way down Main Street and the new Electrical Parade dazzled and charmed those in attendance.

This was followed by Disneyland’s new fireworks spectacular Disneyland Forever. This fireworks display became an instant favorite to those in attendance and has remained popular ever since.

Here were Lisa and my thoughts following this magical evening:

After seeing Disneyland Forever and Paint the Night, I made my way home to post coverage of the day’s events and for a few short hours of sleep before the official kick off for Disneyland’s Diamond Celebration. A 24-hour day at Disneyland is always a big deal. Add to it the kickoff for a major milestone and celebration for the Disneyland Resort and it becomes an even bigger deal. When I arrived before the crack of dawn on the morning of May 22nd, the energy in the air was electric. There was no hint of the sun rising yet but thousands upon thousands of fans were already ready lined up (some were lining up at 6:00 pm the night before!) for a magical day at the happiest place on Earth!

The day began with a countdown (complete with fireworks) at the top of Main Street USA and then the throngs of guests began to stream into Disneyland for their 24 hours of magic. Looking back on it now, this might be one of the highlights of the entire Diamond Celebration for me. It was an explosion of happiness and excitement and it is hard to not smile as I think back about this moment.

Yes, there might have been a severe lack of sleep but the excitement of the day countered that. This was a very good thing because I also did some interviews about many of the exciting things going on. In the first interview, I was able to learn about how the World of Color fountains work up close! I definitely was geeking out inside as I learned how this extremely complex technology comes together to create this beautifully magical show.

I also had the honor of interviewing Disneyland Resort Ambassador Jessica Bernard about the Disneyland Diamond Days. Every day throughout the Diamond Celebration, a daily prize was given out. There were also some other opportunities for Disney fans to win. It was a treat to interview this Disneyland Ambassador while in the Disneyland Dream Suite.

Back on Main Street, I had the opportunity to interview Justin Arthur from the Walt Disney Archives. Not only did we get to perform a little magic, we also got to take a look at some really awesome Disney artifacts that relate to the early days of Disneyland. A highlight of this interview was getting to see the opening day tickets and parking pass.

My final interview of the day was with imagineer David Caranci. This gentleman was the man behind the decorations seen throughout the Disneyland Resort during the Diamond Celebration, including the dazzling Sleeping Beauty Castle!

My interviews may have been done for the day but, there was still more than 12 hours before the end of the 24 hour day. A good portion of this ended up being spent sitting in front of City Hall waiting for the first public performance of the Disney Paint the Night Parade. These are the experiences where memories are made that last a lifetime. Yes, it was a very long wait but it was a fun wait.

Throughout the night we also watched the fireworks, World of Color – Celebrate! again (early early early in the morning) and somehow managed to make it through 24 hours of Disney magic without falling asleep.

Here are my closing thoughts on this three day marathon that culminated with the 24-hour Disney Day: July 17th is always a very special day to Disney fans. While there are many other milestones that could be recognized and celebrated, the opening of Disneyland seems to top them all off. It offers Disney fans that chance to connect with Walt Disney each year as they return to the original Magic Kingdom.

There were two very special festivities that occurred on Disneyland’s official 60th birthday. The first was a ceremony that took place in front of Sleeping Beauty Castle. Hosted by Disneyland President Michael Colglazier the ceremony recognized both Disney family members and also Disney legends who were in attendance. The Million Dollar Dazzle was also announced with the first gift going to the Girl Scouts (it should be noted that it ended being a multi Million Dollar Dazzle). Then Ashley Brown and Richard Sherman provided a beautiful rendition of Walt Disney’s favorite song, Feed the Birds. The ceremony ended with everyone singing Happy Birthday to Disneyland as Disney characters joined in front of Sleeping Beauty Castle. It was a lovely ceremony. Hearing Feed the Birds performed by Ashley Brown and Richard Sherman will always be a beautiful moment that sticks out from that day.

A couple of hours after the ceremony, the new Disneyland Band marched to almost the same spot for its first castle set. Joined by Mickey and the gang and eventually the Dapper Dans, this energetic group added to the excitement of the day. It was definitely a fun highlight of the day for this former band geek.

The second large event of the day was a cavalcade that celebrated the legacy of Cast Members that have continued to make Disneyland a magical place since 1955. This was such a joyful cavalcade and really was a lot of fun to watch.

The Disneyland Diamond Celebration is coming to a close and once again the Disneyland Resort is moving on to something new. Walt Disney once said “Disneyland will never be completed. It will continue to grow as long as there is imagination left in the world.” With the new Star Wars themed land on the horizon in Disneyland and Guardians of the Galaxy coming to Disney California Adventure, it will be exciting in the coming months and years to see how Disney’s imagination continues to be realized in ways that maybe even exceed what Walt Disney originally imagined… or perhaps it is just scratching the surface. Either way, Walt Disney’s dream continues to live on over 60 years later and I can’t wait to see what comes next!