In the first Marvel Comics news digest of 2016 we find Marvel bringing a new way of brining readers up to date.  Story Thus Far is a type of variant cover that catches up readers before seeing what’s inside.  Secret Wars and Invincible Iron Man has some previews with these.  Also introduced with Iron Man is a new storyline called War Machines.  Also below is a new Deadpool comic, second printing information, and info on Hip-Hop variants.

New York, NY—January 4th, 2016 — You won’t believe what happens next! As All-New, All-Different Marvel continues to capture the imagination of comic fans the world over, prepare for the start of the second arc of your favorite new series with brand new STORY THUS FAR VARIANTS. Coming to the first issue of select second arcs, experience all the big action and can’t-miss moments of the first arc in one striking image! Continuing Marvel’s efforts to promote new ongoing series, STORY THUS FAR VARIANTS offer fans the opportunity to get caught up with new titles and add exciting variant covers to their collection!

“The Story Thus Far Variants are something new we’ve never attempted before,” says Marvel SVP Sales & Marketing David Gabriel. “Using one piece of artwork to give new fans a quick snapshot of what’s going on and get them ready for the second arc. In an effort to continue promotion of these exciting new titles, we’ll also be using this artwork for online advertising and in comic shops across the country. ”

Look for STORY THUS FAR VARIANTS on these upcoming February and March titles:

Plus, look for more STORY THUS FAR VARIANTS in April and beyond!

Prepare for more explosive action and more bombastic battles. If you thought the first arc was jam packed with epic moments, just wait till you see the second! Get caught up with STORY THUS FAR VARIANTS coming to comic shops this February!

New York, NY—Jan 8th, 2016 — It’s the story that has the whole world on the edge of its seat. The biggest Marvel event of all time. And this January – it all comes crashing down and births the All-New, All-Different Marvel Universe. To get ready for this gargantuan battle royale, Marvel is excited to present “SECRET WARS: THE STORY SO FAR.” In order to prepare for the cataclysmic and Battleworld-shaking chapter, recap the entire event now with the help of Marvel.com Host, Lorraine Cink:

SECRET WARS: THE STORY SO FAR

Battleworld teeters on the brink. Armies march against God Doom. What will become of this strange patchwork planet? Who lives? Who dies? One thing is for certain – nobody will come back from Battleworld the same and you won’t believe what it STARTED! 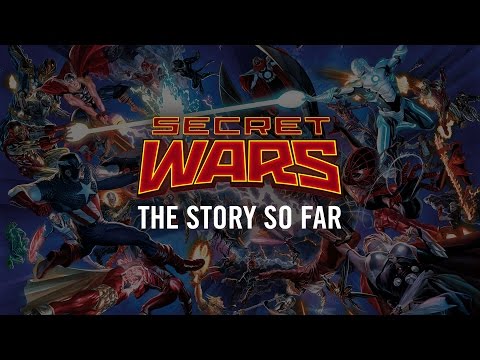 Be there for the explosive conclusion and the genesis of the new Marvel Universe in SECRET WARS #9 on sale January 13th!

New York, NY—January 05th, 2016 — Strap in, suit up and hold on, because the second arc of the flagship Marvel title starts here! Today, Marvel is please to present your first look inside INVINCIBLE IRON MAN #6 – the explosive first chapter of “The War Machines”! Blockbuster creators Brian Michael Bendis and Mike Deodato unite to bring you the next chapter in Tony Stark’s life. All is not right within the house of Stark as he uncovers threats from within and threats from without. Now, he must delve into the nooks and crannies of his international organization to discover the truth. And he’s bringing a friend: James “Rhodey” Rhodes – the War Machine! Plus, the first big clues to 2016’s CIVIL WAR II begin here! Don’t miss the kickoff to the exciting new storyline and a perfect jumping on point this February in INVINCIBLE IRON MAN #6!

Marvel’s Free Hip-Hop Cover Sampler Comes to Comic Shops!
Get 14 Of The Most Popular Hip-Hop Covers With This Free Sampler!

New York, NY—January 05th, 2016 — Marvel’s Hip Hop Variant initiative is a hit! And we’re bringing those can’t-miss mashups back to stores January 6th with Marvel’s free Hip-Hop Variant Sampler! Fans can’t get enough of Marvel’s homages to the most iconic and well received albums of all time. So we’re bringing them back to your local comic shop once more! The sampler has been promoted everywhere from the New York Times, Entertainment Weekly, Fuse, MTV, Fortune, VIBE, RevoltTV, MassAppeal, Uproxx, XXL and many more, Marvel’s hip-hop mash-ups are taking the stage for their encore! Promoted to Marvel fans new and old, this free sampler reprints 14 of the most popular Hip-Hop covers!

As a thank you to fans and retailers, Marvel is inviting you to kick off 2016 at your local comic shop. Heavily promoted and hotly anticipated, we’re pleased to bring fans new and old into shops for this free sampler. But don’t wait, it’s sure to fly off the shelves!

Featuring industry legends, rising stars and even some of the creators behind the blockbuster All-New, All-Different Marvel titles – the Hip-Hop Variant Sampler features the following 14 covers, reprinted for fans:

Hip-Hop and Marvel unite once more, joining together the exciting world of comics and the sound of a generation. Tomorrow, Marvel is proud to bring these unique mash-ups to a brand new set of fans and customers. Be there tomorrow when Marvel’s first ever Hip-Hop Variant Sampler drops!

Kick Off 2016 With More Sold Out Marvel Titles!

Don’t Miss The Second Printings of These Hit Issues!

New York, NY—January 6th, 2016 — The new year is off to a bombastic start as even more second printings of your favorite All-New, All-Different Marvel titles are coming to comic shops! Featuring the hottest creators, the biggest characters and the best stories, don’t miss one issue of these hit new titles!

Missed the penultimate issue of Secret Wars before the big finale next week? What about the first issue of Rocket Raccoon and Groot’s latest intergalactic adventure? Or the kickoff to the newest arc of Amazing Spider-Man? Don’t worry – we’ve got you covered! Catch up when second printings of SECRET WARS #8, AMAZING SPIDER-MAN #6, HOWARD THE DUCK #3, NOVA #3, ROCKET RACCOON AND GROOT #1, SPIDER-MAN 2099 #5, SPIDEY #2 and OBI-WAN AND ANAKIN #1 all return to comic shops in early 2016!

Now is the time to jump headfirst into the Marvel Universe! Here’s what some of the critics have to say!

“This series is very exciting – its approach is so new, there’s no way of anticipating what could happen next.” – AiPT!, on AMAZING SPIDER-MAN #6

“The first issue is another solid entry in the new line of Star Wars comics….Another must get for Star Wars fans.” – Graphic Policy, on OBI-WAN AND ANAKIN #1

Did you miss out on your chance to get your hands on any of those exciting issues?  We’re just getting started – so hop on board the titles that are burning up the charts and have the whole comics industry talking!

More Deadpool Than You Can Handle – Your New Look at
DEADPOOL AND THE MERCS FOR MONEY #1!

New York, NY—January 4th, 2016 — Deadpool, Deadpool and more Deadpool! That’s right – he may be an Avenger now, but he’s also got his own team of private mercenaries. And they’re all coming at you in DEADPOOL AND THE MERCS FOR MONEY #1 – a brand new limited series coming this February from creators Cullen Bunn and Salva Espin! Deadpool can’t be everywhere at once, so if you’ve got a problem and a pile of cash you’re not overly fond of – the legally-cleared-to-be-called Mercs for Money can help! Deadpool you know. But what about Stingray, Masacre, Solo, Foolkiller, Terror and Slapstick? Time to get acquainted with these miscreant mercenaries! Point them at the problem and watch as it’s shot, stabbed, pulverized and otherwise made bloody! But when the Mercs are hired to retrieve a strange artifact from the Beyond Corporation – they’ll soon find themselves in over their heads and up to their eyeballs in all manner of deadly assassins! Don’t miss the kickoff to the pandemonium this February in DEADPOOL AND THE MERCS FOR MONEY #1!