House of X and Powers of X are set to completely change the X-Men and Marvel universe.  After quite a few years of some weird stories and many of the longtime favorites becoming deceased (though coming back in weird ways), it’s nice to see the classic characters coming back to a modern prominence.  One example is seeing the character X (who is Professor X with a new body) having a Cerebro-like helmet to amplify powers.  Take a look at the trailer and press release below: 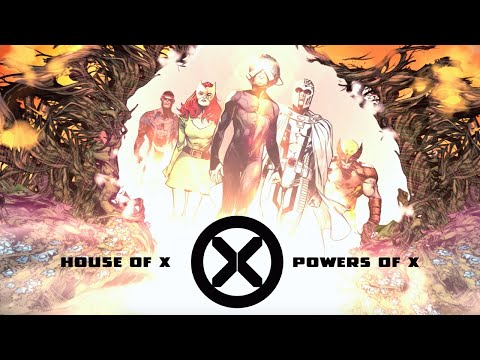 FIGHT FOR THE FUTURE OF MUTANTKIND IN THE HOUSE OF X / POWERS OF X TRAILER!

“House of X and Powers of X are two stories that act as one story. They absolutely are separate, but by the end they collide together and coming out of that is the new paradigm for the X-Men universe,” explains Hickman.

In this epic story starring almost every single mutant in the Marvel Universe, Jonathan Hickman takes the reins of the X-Men and will revolutionize everything you know about mutants. Shocking secrets will be revealed throughout Marvel history that will affect every member of mutantkind, especially the X-Men. Follow this incredible story and witness the most important scene in X-Men history!

“If you have been a fan of X-Men in any era, there is something in here for you,” promises White.

For Marvel’s 80th anniversary a special Marvel Comics #1000 brings back the original series that started it all.  For the momentous occasion, there are variant covers by various artists for the issue.

New York, NY—June 28, 2019— In celebration of Marvel’s 80th anniversary this year, scores of comic creators – some Marvel icons, some first-timers – are assembling for an epic comic book story in honor of the very first issue of MARVEL COMICS. This August, get ready for MARVEL COMICS #1000, a massive collaborative effort that will see 80 different creative teams weave together one, expansive story.

In honor of an 80-year legacy, we’re proud to present an incredible lineup of variants, all by an exceptional roster of artists, that exemplify the richness and scope of Marvel history. Collect these iconic covers soon!

For 80 years, Marvel has reflected the world outside your window – inspiring millions of fans with iconic characters and timeless stories that brought the Marvel Universe to the forefront of pop culture today. Celebrate Marvel’s historic 80th anniversary all year long with your favorite Marvel comics, games, shows, collectibles, fashion, and more. Visit marvel.com/marvel80 or follow #Marvel80.