Disney VoluntEARS and KaBOOM! Build First of its Kind Playgound For Kids with Disabilities in Anaheim

This past Saturday, 300 volunteers descended on Barton Elementary School and Park in Anaheim, California for an extra special playground build. It’s the first of its kind in Anaheim, and will allow everyone the opportunity to play, regardless of any disability they may have. The reason this playground is special, is because it has wheelchair accessibility, allowing even more kids the chance to play! Disney VoluntEARS, KaBOOM!, the YMCA, and City of Anaheim came together to build this incredible playground, and to beautify the campus of Barton Elementary School. Teams of volunteers were spread all over the campus and park, as they painted, built gardens, and put together countless pieces of what would ultimately become the playground.

I had the opportunity to walk around for a majority of the day and check out the progress taking place. It was really incredible to see all of these people come together and create this haven for these kids. Some of the kids that lived in the area were walking around and checking out what was happening. They couldn’t believe that this was their school, and they were excited to go back on Monday.

Disneyland Resort Ambassador Rafa Barron and Disneyland Resort President Josh D’Amaro were both on hand to assist with the build. Here’s what Rafa had to say about the day: “I am so happy to be here because this is the first time that I’m participating as an Ambassador in one of these events. And, I am so passionate for all the work that we do here at Disney, and bring all the magic to the city of Anaheim, and work with our community. So, it’s a great honor for me to be here.”

Many of the elements added are geared toward kids with special needs or disabilities, including a Braille wall, and sensory walls. The garden that was built was specifically designed with visually impaired students in mind.

In just a matter of hours, this playground was put together for a special ribbon cutting ceremony. All of the volunteers, local kids, and even Mickey Mouse were in attendance as Josh D’Amaro, Anaheim Mayor Harry Sidhu, and a number of other representatives talk about the impact of this park. The hard work of the volunteers would certainly be remembered as thousands of kids will be able to enjoy this park with their families. 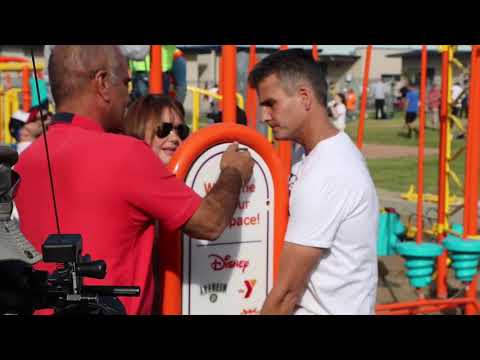 The new playspace includes unique equipment and accessibility features that allow children to play together regardless of ability, including a merry-go-round style device called a Unity Spinner with seatbelts for wheelchairs. Other accessible features include accessible swings and a new-age teeter-totter called a Teeter Tunnel that includes a feature to help children transfer out of a wheelchair and onto the teeter. Numerous features also were included for visually impaired children such as braille panels.

In September, children from the surrounding community, including students at Barton Elementary School, came together to envision and draw their dream playground. The new playspace is based off their drawings and provides more than 650 kids in Anaheim with a great, safe place to play. Play is the business of childhood and is essential to the physical, cognitive, creative, social and emotional development of every child.

“This new playground is a shining example of what happens when Anaheim encourages our business partners to invest in our neighborhoods,” said Anaheim Mayor Harry Sidhu. “Our businesses not only bring in revenue for our city, they also bring generous improvements, such as this, for the well-being of our kids and families.”

“Working with Disney and the City of Anaheim, the Anaheim Family YMCA is proud to be a contributing organization to these worthwhile projects that strengthen the Anaheim community and its residents,” said Dr. Rick Martens, CEO of the Anaheim Family YMCA. “For our many staff members and volunteers, this type of service is always a rewarding experience.”

Since 1996, KaBOOM! has been dedicated to the goal that all kids get the childhood they deserve through great, safe places to play. This playground is one of many made possible with support from Disney, as part of The Walt Disney Company Healthy Living Commitment, a long-standing commitment to create healthier generations by making healthy living fun and simple.

KaBOOM! works to accelerate efforts that move every kid in America to play every day. Together, Disney and KaBOOM! have built more than 80 new playspaces across America, giving nearly 100,000 kids access to healthier lifestyles and safe places to play and grow.

About the City of Anaheim

Anaheim is a full-service city supporting more than 358,000 residents, 20,000 businesses and 25 million annual visitors. The city provides public safety through the Anaheim Police Department and Anaheim Fire & Rescue, water and power service through Anaheim Public Utilities, parks, community centers, family services and libraries through Anaheim Community Services, neighborhood and transportation improvements through Anaheim Public Works and community revitalization through Community & Economic Development. Anaheim is a modern, diverse city with a proud history dating back to its 1857 founding. Anaheim is known worldwide as the home of the Disneyland Resort, including Walt Disney’s original Disneyland Park, as well as Angel Stadium of Anaheim and Angels Baseball, Honda Center and the Anaheim Ducks, and the Anaheim Convention Center, the largest on the West Coast. Anaheim’s thriving visitor industry and business community help support the city’s neighborhoods and make Anaheim a great place to live, work and play. For more, please see www.anaheim.net.

About the Anaheim Family YMCA

KaBOOM! is the national non-profit dedicated to giving all kids – especially those living in poverty – the childhood they deserve through great, safe places to play. KaBOOM! inspires communities to make play the easy choice and works to drive the national discussion about the importance of PLAYces. KaBOOM! has collaborated with partners to build or improve more than 17,000 playspaces, engaged more than 1.5 million volunteers and served over 9 million kids. To learn why play matters for all kids, visit kaboom.org and join the conversation attwitter.com/kaboom, facebook.com/kaboom and instagram.com/kaboom. #playmatters #PLAYceforKids

PrevPreviousWhite Water Snacks Gets a Tasty New Menu at Disney’s Grand Californian Hotel & Spa
NextCreate Your Own Personalized Shirt for Your Next Disney VacationNext
Loading Comments...