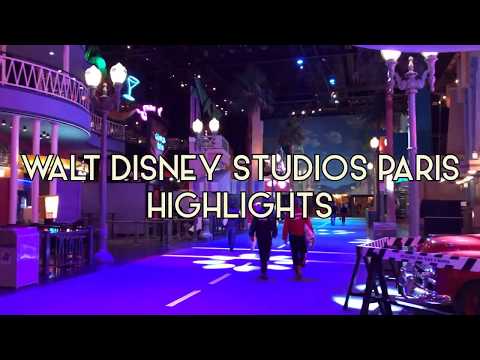 For the Disneyland Paris Half Marathon I was able to visit both parks at the Resort. My first day was going to Disney Studios Paris. Here’s part one of my experience…

The entrance to the park is not like any other Disney park. Instead of an open boulevard it’s a sound stage full of shops and restaurants. The building masks the rest of the park to make for a great reveal with the Partners statue just beyond the doorway. A faux set was full of some great homages to Hollywood and movie past. It also greatly reminded me of the Hollywood and Vine building that opened with Disney California Adventure, but closed not that long after.

Once you past Studio One it is an open courtyard that splinters off to a few destinations of the park. To the right is Toon Studios where some of the more recent attractions are present. Ahead is Tower of Terror and Art of Disney Animation. Tower of Terror is the park’s main weenie and icon. It also provides a nice area of mystique. Around it are some false fronts that house seating areas and food stands.

The reason the attraction surprised me is that it had a great flow and great lobby. Though parts were recycled, it was put together for an original attraction that entertained very well.

The Backlot Tour is oddly located here instead of the Backlot. It’s a strange tour because this was never a working studio, and props and sets were transported over or built just for the attraction. A full Catastrophe Canyon duplicate from Disney’s Hollywood Studios old backlot tour is a part of the ride. Also a London set with a raging fire effect is part of the tour as well.

Twilight Zone Tower of Terror was as creepy as ever. It had that great atmosphere that did not disappoint. And the queues seemed a bit nicer than others, perhaps because it’s one of the newest versions. Small note that a Passholder would notice: Instead of loading line 6 then 3 then 5, etc. they load one side completely and then the other. This probably only makes sense to frequent Tower visitors at the US parks.

The Backlot has a couple of the bigger attractions. Moteurs…Action! is here, along with Rock N’ Roller Coaster and the Armageddon Special Effects attraction.

I didn’t watch Moteurs…Action! though I’ve enjoyed the show at Disney’s Hollywood Studios. I did go to the others. Rock N’ Roller Coaster stars Aerosmith here, like at Disney’s Hollywood Studios. The story and effects are quite different, though. Instead of traveling to a concert as invited guests of the band, you are testing a rock and roll roller coaster of their design. Unfortunately it was a bit confusing in the preshow area where there is still a video showing them, but not with much dialogue. Doors suddenly open to go to the rest of loading area.

The effects on the roller coaster were mostly lights. The track remained the same as the Florida version. Not having the black light cutouts that lit up at the right moment made for an okay experience. It’s still a great roller coaster, but without much story it’s a bit run of the mill.

Armageddon was one of my favorite original attractions from this park. It may utilize a dated movie, but it truly was a spectacular. The preshow with live narrator sets up the reason why you’re here: extras for the movie where we’ll film on the space station set. After that it’s into the room with the set and effects. It was fairly detailed, and was fairly free roaming for a special effects area.

When the action started, asteroids crashed through the ceiling and fire roared from the sides and the middle. It truly felt dangerous…in Disney’s safe manner. Though you know what will happen after going on once, I went on again just to enjoy how much of the senses this attraction employs.