A lot of upcoming celebrations of the return of Jean Grey.  She’s going to also get her own team to lead.  Also a trailer for Avengers: No Surrender and info on a Lockjaw series.

New York, NY—November 7, 2017— The end of the Avengers Era as we know it is arriving…and it all starts with AVENGERS: NO SURRENDER! Today, Marvel is proud to present a teaser trailer for a story that’s so big and so dramatic, we had no choice but to make it a weekly epic!

Co-written by Mark Waid, Al Ewing and Jim Zub with art by Pepe Larraz, Kim Jacinto and Paco Medina, AVENGERS: NO SURRENDER unites the casts and creative teams of three titles into one weekly book of exciting action. It all starts with AVENGERS #675 this January, when the teams of THE AVENGERS, UNCANNY AVENGERS, and U.S. AVENGERS come together in a story as exciting and powerful as the Marvel Universe itself.

Find AVENGERS: NO SURRENDER in stores on 1/15! To find a comic shop near you, visit www.comicshoplocator.com or call 1-888-comicbook.

New York, NY—November 10, 2017 — Fans were surprised and shocked at the news of adult Jean Grey’s return to the Marvel Universe in the upcoming and highly anticipated PHOENIX RESURRECTION (on sale in December), but the 5-issue epic is only be the beginning of exciting new adventures of one of the X-Men’s most beloved characters. Marvel is excited to announce that Jean’s story continues with X-MEN RED, a new series written by Tom Taylor (All-New Wolverine) with art by Mahmud Asrar (All-New, All-Different Avengers Generations: The Unworthy Thor & The Mighty Thor).

“As an X-Men fan, as a Jean Grey fan, as a Mahmud Asrar fan, and as a Travis Charest fan, to be asked to write X-MEN RED is a dream,” said series writer Tom Taylor. “The time is right for an X-Men book like this, and I’m very excited about the story we’re telling in these pages. I’m excited for Jean Grey’s vision for the world, and I can’t wait for Marvel readers to meet our team of established fan-favorites and brand new mutants, and to see them in action. To write a core X-Men book is to walk in the footsteps of giants, so I’m hoping my secret mutant ability is sudden foot-growth.”

“Jean Grey has been one of my favorite characters ever since the Dark Phoenix Saga, so I’m pretty excited to be a part of her return,” added series artist Mahmud Asrar. “The stories we plan to tell really captures the essence of the X-Men I read lovingly growing up. It’s just a delight to be working with this team. I have been working on many components of this book, including the designs of the characters old and new, and I haven’t been this eager to see the response to this book in a long while.”

Featuring new uniforms, a new team headquarters, and exciting new characters, X-MEN RED is the series X-fans have been waiting for. “Tom has captured the spirit of a quintessential X-Men book,” said series editor Mark Paniccia. “It’s got dynamic hero moments, great character interactions, and a surprise villain at the end. Mahmud is doing some of the best work of his career, going into this fully charged and designing cool new costumes for our eclectic team. I’m thrilled to have Travis on covers for this series. I’ve always thought of him as one of the industry’s best artists. It’s a real honor to have him as part of the X-MEN RED crew.”

For a celebration of Jean Grey’s legacy in the Marvel Universe, watch Marvel’s Jean Grey Through The Years video.

New York, NY—November 8, 2018—Phoenix rises again! And Marvel is celebrating with a series of connecting variant covers from Brazilian artist Victor Hugo, who is bringing his spectacular 3D art to the covers of one of Marvel’s most anticipated new series! Staring this January, Hugo’s art will appear on JEAN GREY #11 as well as issues #2-5 of PHOENIX RESURRECTION, each variant cover coming together to form a connecting portrait of the X-Men’s beloved mutant.

“I see this project as a milestone in my life,” said Hugo, who over the past 12 years has worked for Walt Disney Animation Studios, Blur Studios, and more. “I’m a 3D artist and even being a huge Marvel fan, I know that it’s definitely not common for publishers to request 3D illustrations for cover art, so not even in my coolest dreams did I think that someday I would be invited to do a Marvel comic book cover! The Phoenix Force is definitely the coolest thing about Jean, but what I really love about her is her evolution and changes through the years. It was an awesome experience being able to portray all the phases in a single artwork.”

A stalwart Marvel fan, Hugo is excited to be adding his stamp to the long history of artists who have drawn the hero. “I love to portray moments and appealing characters,” he continued. “I believe that having the chance to portray Jean’s key life moments was a great opportunity to express one thing that I like the most about comics: the feeling of adventure! We have action and drama, but the thing that I like the most about X-Men is their adventures and how characters evolve with that, and that’s what I wanted to focus on.”

Don’t miss your chance to be a part of the magic with Marvel’s connecting Phoenix variant covers this January!

Celebrate Jean Grey Through The Years With A New Video!

New York, NY—November 9, 2017—In celebration of one of its most beloved characters, Marvel is proud to present JEAN GREY THROUGH THE YEARS: a look back at the iconic mutant’s history with the X-Men!

Watch the Jean Grey Through The Years trailer now!

Take a moment to relive all the classic moments of Jean Grey, from her debut in 1963’s X-MEN #1 to the return of her adult form in the upcoming PHOENIX: RESURRECTION. And keep watching until the end for a special reveal! 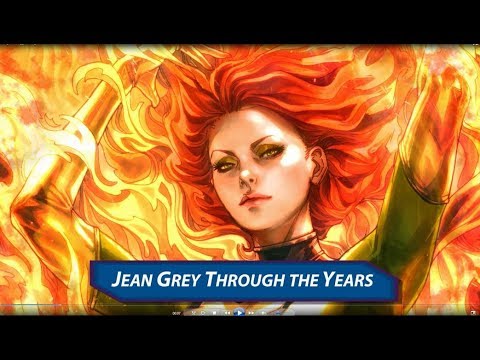 Marvel Announces LOCKJAW Comic
The teleporting canine will embark on a whirlwind adventure in his new series!

New York, NY—November 8, 2017— He’s been a breakout star since he could bark, a faithful sidekick to his Inhuman masters, and has helped protect an empire. Now, he’s got his own mission to take on — Marvel is excited to announce LOCKJAW #1, a new four-part mini written by Daniel Kibblesmith with art by Carlos Villa.

When Lockjaw finds out his long-lost siblings are in danger, he’ll embark on a journey which will result in a teleporting, mind-bending adventure. “We’re super excited about this book. Daniel Kibblesmith—a hilarious writer who works on The Late Show and recently published a book called Santa’s Husband—has cooked up an incredibly fun, heart-filled romp around the Marvel Universe,” said series editor Wil Moss. “Back in BLACK BOLT #5, writer Saladin Ahmed and artist Frazer Irving finally settled the mystery of Lockjaw’s origin: He’s definitely a dog, birthed by a dog, who happens to have the power of teleportation. But now we’re going even further: How did Lockjaw obtain that power? And is he really the only Inhuman dog in the universe? So in issue #1, we find out that Lockjaw’s got brothers and sisters. From there, we’ll be following everybody’s best friend around the universe as he tracks down his siblings—along with a surprising companion, D-Man! It’s gonna be a fantastic ride, all beautifully illustrated by up-and-comer Carlos Villa! So grab on to the leash and come with!”

You heard us: Grab a leash, prepare your mind, and teleport along with Lockjaw when LOCKJAW #1 hits comic shops this February!