It’s Halloween Time At Disneyland! – A Look At Tower of Terror, Haunted Mansion Holiday, And More 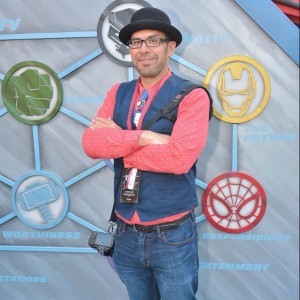 Halloween has hit the Disneyland Resort and there are quite a few offerings this year for the occasion.  Even the traditional attractions and characters have a new spin on their classic ways this year…

Among the things to do for Halloween Time at Disneyland, Ghost Galaxy has become a staple.  This year is no different, though throughout the rest of the year is the Hyperspace Mountain overlay.  Space Mountain’s Halloween overlay is still frightfully fun.

Over on Main Street, the Mickey shaped Jack O’ Lantern is back and a popular spot for photos.

One thing that doesn’t change too much, but did a bit for this year is Mickey and Minnie.  They are both in their common Halloween costumes, but with the “new look” that debuted this week after the 60th anniversary.  Though a bit controversial, the couple looks great and much more cartoony and animated.

Of course, one attraction that is back again is Haunted Mansion Holiday.  Though not a full attraction, this overlay is 15 years old this year and debuted with a new addition to mark the milestone.  Besides the always different gingerbread house, Sally now appears in the graveyard scene.  Sally is Jack Skellington’s gal, and has appeared before, but never full figured.  The new animatronic leans on a grave stone and stares longingly at Jack, who is Sandy Claws.  It’s a nice addition to a long standing tradition of an attraction.

The gingerbread house paid homage to the mansion itself.  Though not the biggest they’ve had, the house is always nice to see and smell.

Outside the mansion is a small new addition.  Besides pumpkins with sinister smiles, a small graveyard was introduced atop the hedge berm.  The epitaphs are Halloween puns for the holiday.

It’s The Final Check Out

Over in Disney California Adventure, the soon to be gone Twilight Zone Tower of Terror is getting into the act of the holiday time.  Besides a Final Check Out motif that is popping up, the attraction has a special mode at night called Last Check Out.  Each night at twilight, the ride will switch over to a complete darkness mode for guests brave enough to ride.

The “daytime” line will be cleared before the night guests get in the queue.  This first night it was 7 pm that the line was cut off.  Before that happened, Cast Members established a waiting area by the Hyperion Theater.  It seems this will be the beginning of the line each night for those wanting to specifically ride the night version.  After the daytime guests have ridden, the night group is escorted through. So, is this night version scary and really in complete darkness?  Not quite.  First of all, the ride follows the same plot and soundtrack, with the exception of music.  No music and sound effects are heard throughout the attraction while riding.  Just the main narration is played.  There are some parts that are not completely dark because of ambient light.  The scene with the mirror has the screen not completely turned off because of a slight glow still evident.  The hallway that disappears is a bit visible, but it makes it more eerie.  You’re not seeing any show to it, just a very dark hallway and it makes it that much more creepy.  At the very top the elevator doors still open for the flash picture that you can purchase at the exit.  What’s the difference?  Not having the music and sound effects makes it harder to guess exactly when you first fall.  And, like I said, that hallway scene is much more scary with seeing faint outlines of an already intimidating scene.

Outside the Tower is a photo opportunity with some themed suitcases and cart.  It doesn’t sound like much, but it’s a nice feature for a beloved attraction departing.  And, a great addition to the Halloween time at this park.  Inside the lobby are the Silver Lake Sisters that have a poster in Fiddler, Fifer, and Practical Café.  This singing group does perform while guests wait to embark on the strangest journey of their lives.

Halloween Time has a plethora of food.  Some more popular than others.  One drink that also came with a ghostly cup caused lines of up to 90 minutes!  This Chilling Challenge, a drink at Trader Sam’s, comes in a Hitchhiking Ghosts tumbler to take home.  Only two per guest on a visit.  On the first day, lines were going well out the building and even toward Downtown Disney!

Over at the parks, a lot of restaurants have special cuisine for the holiday.  I only tried two on this trip: the ice cream nachos at the Golden Horseshoe, and the Anti-Vampire Chicken Pizza at Boardwalk Pizza and Pasta.  The ice cream nachos had waffle cone “chips” that sat under three scoops of ice cream.  On top of the ice cream was hot fudge, whipped cream, sprinkles, and a cherry!  They were a great sweet treat and I’d have them again…and again.  Nothing was overwhelming about this dish.  It was nice to have the variety of ice cream flavors too.

The Anti-Vampire pizza is so named because of a garlic sauce that takes the place of traditional red pizza sauce.  When I picked up the slice I could smell the garlic well.  But, it wasn’t overpowering in eating.  It tasted great!  Roasted chicken chunks were part of the toppings.  Red peppers and a spicy sauce (that I really couldn’t tell was spicy) sat atop too.  It was one of the better pizzas of the park.  It had a nice balance of chicken and garlic.  The crust was moist and also delicious.  It’s a great Halloween

This Halloween Time has a lot going for it this year.  Whether it’s decorations or attractions or characters, there’s a lot to see and do.  I’m looking forward to having more food as there are some great tastes to be had!  Having some twists to regular attractions make them much more re-rideable this year also.  All of this is making me look forward to visiting again and again this year for Halloween!  And I haven’t even gotten to the Halloween Party yet…