Japan’s largest airline, ANA, has shared the date for the upcoming inaugural flight of their BB-8 themed jet. The BB-8 ANA JET (Boeing 777-300) will begin its international routes this March 27.

After unveiling the aircraft in a ceremony on March 27 at Osaka’s Itami Airport, where the special livery was applied, the aircraft will make a one-off domestic flight as ANA22 from Itami to Haneda, before departing the airport at five minutes past midnight on the following day (March 29) as flight ANA106 to Los Angeles, marking the start of the aircraft’s international service. The aircraft is then scheduled to fly various international routes, principally routes linking Haneda, Narita and US – Los Angeles, New York, Chicago, Washington D.C., and Houston.

Also, the company is currently holding an awesome sweepstakes. The lucky winner will receive a pair of round-trip tickets from Los Angeles to Tokyo on the newly themed jet. In addition, 50 other winners will receive a special BB-8 ANA JET model plane. If you are interested in the sweepstakes, please click here for more details.

Would you enjoy a ride on the BB-8 themed jet? 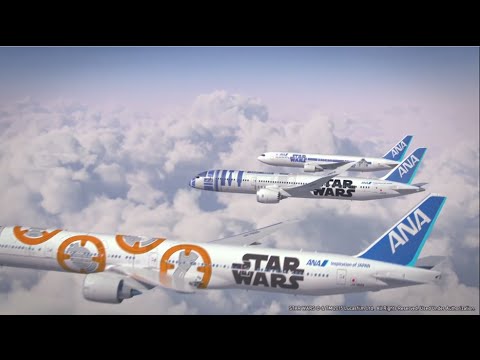