SPECTRE is the title for the 24th James Bond film. At a launch event in Buckinghamshire’s Pinewood Studios this morning, Director Sam Mendes revealed the title for the film along with the cast and Bond’s Aston Martin.

A cryptic message from Bond’s past sends him on a trail to uncover a sinister organization. While M battles political forces to keep the secret service alive, Bond peels back the layers of deceit to reveal the terrible truth behind SPECTRE. 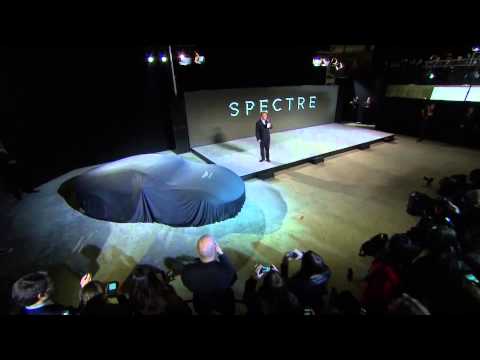 SPECTRE is in rehearsals currently and will begin principle photography on Monday December 8, 2014. It will be filming in London, Mexico City, Rome, Tangier, Morocco, as well as in Austria. Bond will be driving the newly unveiled Aston Martin DB10 after the destruction of his classic Aston Martin in SKYFALL.

For those of you who haven’t been long time Bond fans, SPECTRE stands for: Special Executive for Counter-intelligence, Terrorism, Revenge and Extortion. It has deep roots with the James Bond films going back to 1960s. The organization appeared in From Russia With Love, Thunderball, You Only Live Twice, On Her Majesty’s Secret Service, Diamonds Are Forever and For Your Eyes Only. In the original books and movies, the organization was led by Ernst Stavro Blofeld. In 007 lore, there is a connection between an Oberhauser and Blofeld. Interestingly enough, a Hannes Oberhauser was a skiing instructor for Bond who also was somewhat of a second father. No word on if Waltz is THAT Oberhauser though. There is an entire year to speculate about that though so we’ll just leave it at that.