Rusty returns in Planes: Fire & Rescue for a whole new adventure that is all about second chances and facing fears. All of this happens when Rusty is damaged and his future is looking bleak. Couple this with an accident at the airport that necessitates the need of a second firefighter and Rusty finds himself flying to Piston Peak National Park to learn just that. There he learns from the best fire fighting helicopter of them all, Blade Ranger. Blad Ranger is joined by his team Dipper, Windlifter, Cabbie, and the Smokejumpers. When a massive wildfire endangers the area, Rusty learns a lesson about heroics and sacrifice.

Planes: Fire & Rescue looked and sounded pretty good. The colors were nice and there were some absolutely beautiful. However, it didn’t pop out of the screen like the Pixar Cars movies do that the Planes movies are attempting to emulate. The sound was actually more impressive to me than the visual was. There was a nice utilization of the surround sound which is always a perk when there are planes flying around. It really adds a lot.

The bonus features for Planes: Fire & Rescue were cute but left me wanting more. I found myself wishing they had done more bonus features that went into the making of the film a bit more. In Disney’s Planes I remember a feature that went into the director’s connection with planes and I wanted more like that. There weren’t any features that I didn’t like. Here is what comes with the blu-ray release: 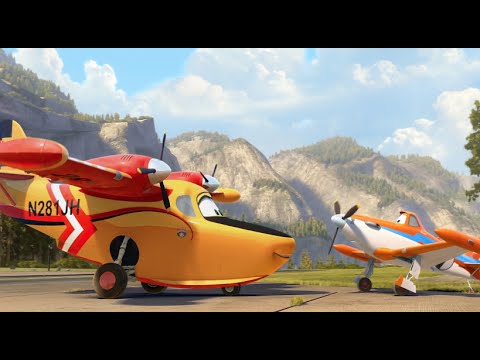 Planes: Fire & Rescue takes Rusty and the gang into a new direction that perhaps wasn’t expected from a racing plane. This was a nice idea that made for a cute movie. However, it won’t go down in the history books as a hit for Disney. The movie came off as formulaic with a plot that feels pretty familiar and the same could be said for the characters. There are some redeeming qualities about this film though. It does have some cute and funny moments. It does have some beautiful scenes. However, those are tempered by a story that might be a bit intense for little ones or those kids. Planes: Fire & Rescue is a cute movie. If you liked the first movie, you will most likely enjoy this one as well. If you are a Pixar purist, you might want to avoid it. If you are looking for more family friendly films to add to your title for the kids/grandkids as Christmas nears, this is definitely a safe one to add to the collection or to put under the tree.

I give this film a hat nod for family friendliness and lessons that come from the film. No hat tip though as it just doesn’t get pass that cute level and enter the realm of a strong film. Go into this film expecting a Pixar film and you’ll be disappointed.  Go into it just to enjoy it and you’ll be fine.

THE PLANES ARE BACK IN THE YEAR’S ULTIMATE

After flying to the top of the box office this summer as the #1 animated movie in America three weeks in a row, “PLANES: FIRE & RESCUE” soars to spectacular new heights on Blu-ray and Digital HD, featuring wondrous high definition picture and sound, plus thrilling bonus features, including the all-new exclusive short “Vitaminamulch: Air Spectacular;” the mock-umentary promotional piece “Welcome to Piston Peak;” “CHoPs” TV Promo and “Air Attack:  Firefighters From The Sky,” an exciting inside look at the making of the film featuring real-life smoke jumpers and firefighters. Additional bonus features include Spencer Lee’s “Still I Fly” music video, deleted scenes with filmmaker introductions, and two “PLANES: FIRE & RESCUE” shorts: “Dipper” and “Smokejumpers.” Exclusively available on Disney Movies Anywhere (DMA) are the bonus shorts “Blade Ranger” and “Piston Peak.”

Harvey and Wes Studi (“Avatar”) as Windlifter. It was directed by Roberts Gannaway (“Secret of the Wings”) and produced by Ferrell Barron (“The Fox and the Hound 2”).

·       “Welcome to Piston Peak! – This mock-umentary promotional piece shows off all the highlights of the acclaimed Piston Peak National Park and its aerial firefighting team.

·       Air Attack:  Firefighters From The Sky – This high-energy, music-driven behind-the-scenes piece takes an inside look at the real smoke jumpers and firefighters who attack wildfires from the air as Director Roberts Gannaway and Producer Ferrell Barron take us through their journey in making the film.

Stay connected with the latest news and information about Disney’s “PLANES: FIRE & RESCUE”:

“PLANES: FIRE & RESCUE” is a new comedy-adventure about second chances, featuring a dynamic crew of elite firefighting aircraft devoted to protecting historic Piston Peak National Park from raging wildfire. When world-famous air racer Dusty (voice of Dane Cook) learns that his engine is damaged and he may never race again, he must shift gears and is launched into the world of aerial firefighting. Dusty joins forces with veteran fire-and-rescue helicopter Blade Ranger (voice of Ed Harris) and his courageous team, including spirited air tanker Dipper (voice of Julie Bowen), heavy-lift helicopter Windlifter (voice of Wes Studi), ex-military transport Cabbie (voice of Captain Dale Dye) and a lively bunch of brave all-terrain vehicles known as The Smokejumpers. Together, the fearless team battles a massive wildfire and Dusty learns what it takes to become a true hero.

Disney Movies Anywhere (DMA) is a cloud-based digital movie service that offers a hassle-free way for consumers to buy, watch, and manage Disney digital content across platforms and devices via the easy-to-use DMA app or atDisneyMoviesAnywhere.com. A DMA-eligible digital title purchased from an iTunes-connected account or redeemed in DMA will be accessible in a user’s DMA and iTunes lockers. There are currently over 400 films from Disney’s rich history available through DMA for streaming and download, including Disney Branded Animation, Disney Live-Action, Pixar, and Marvel titles, along with exclusive, original content. For more information or to redeem Digital Copy codes to build your library and earn Disney Movie Rewards Points for digital purchases, visit http://www.disneymoviesanywhere.com.

For over 90 years, The Walt Disney Studios has been the foundation on which The Walt Disney Company was built. Today, the Studio brings quality movies, music and stage plays to consumers throughout the world. Feature films are released under the following banners: Disney, including Walt Disney Animation Studios and Pixar Animation Studios; Disneynature; Marvel Studios; Lucasfilm; and Touchstone Pictures, the banner under which live-action films from DreamWorks Studios are distributed. The Disney Music Group encompasses the Walt Disney Records and Hollywood Records labels, as well as Disney Music Publishing. The Disney Theatrical Group produces and licenses live events, including Disney on Broadway, Disney On Ice and Disney Live!