It’s funny to say that one of the most anticipated attraction openings at Walt Disney World is the brand-new Skyliner Gondola system. Disney fans have expressed their excitement over this new transportation option at the resort. It creates a sense of nostalgia for those that remember the Sky Buckets at both Disneyland and the Magic Kingdom. This morning, the Disney Parks Blog announced that the Skyliner will open to guests on September 29th, 2019! The Skyliner will transport guests between two parks, Epcot and Disney’s Hollywood Studios, and four hotels, Art of Animation, Pop Century, Caribbean Beach Resort, and the upcoming Rivera Resort (scheduled to open December 2019). This is a new, state-of-the-art transportation system that will not only serve as a functional way to get around the resort, but an exciting way to see Walt Disney World in a whole new way! The gondolas have been tested for a few months, and now we’re excited to have an official opening date! Many of the gondola cabins feature some of our most favorite Disney characters and even attractions! The Disney Parks Blog has previously given guests a sneak peek at cabins featuring Mickey, Minnie, and their pals, and announced a few more designs that guests can expect to see. Here are some of those designs from the Disney Parks Blog: We cannot wait for this new mode of transportation to open at the Walt Disney World Resort! What do you think of the announcement made today? 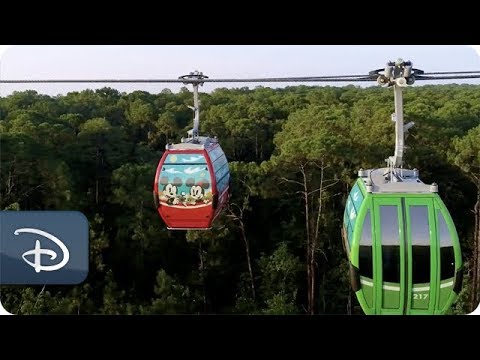