Continuing on the photo and video tour, here’s the last two lands and some of the entertainment of Walt Disney Studios Paris.

Disney Studios Paris was the first of this now multi-park land. Slinky Dog Zigzag Spin, Toy Soldier Parachute Drop, and RC Racer made their debut here before the Hong Kong Disneyland mini-land was opened. The entrance to Toy Story Land features Buzz Lightyear who speaks in both English and French as guests move past him. He explains some of the land inside.

For the most part the attractions are all outdoors. The details are great showing off how much of the rides are made from toys. RC Racer is the big hit, being like a small roller coaster even though it just goes back and forth.

Toon Studio is where many of the kid friendly, whimsical attractions are located. A great Sorcerer’s Apprentice Mickey statue provides a nice sign, and beside it is the Art of Disney Animation.

I was surprised at the Art of Disney Animation. Inside is a lobby with some great displays showcasing the history of animation, and some of Walt Disney’s breakthroughs. The lobby is a waiting area for a film that shows highlights of Disney animation. Though it was a montage I really enjoyed how it was put together, and it had me feeling like a kid again in awe of the great moments of Disney films. After viewing, you make your way into another theater where it shows the story of Mushu. Those who have gone to Disney California Adventure in its early days would recognize the live host/recorded Mushu show from the Animation attraction there. It shows how characters come to be from concept to reality. Though it’s in French there are headphones that let guests select the language they know. 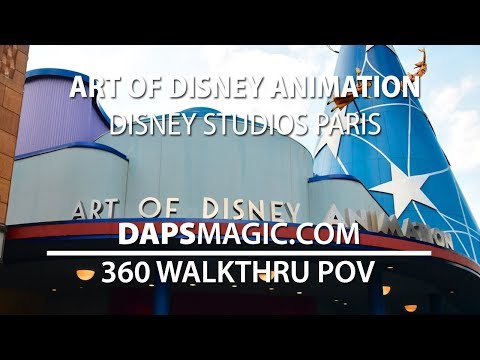 Cars Quatre Roues Rallye is a standard spin ride, while Les Tapis Volants is the same as Flying Carpets in Magic Kingdom. But, the atmospheres are somewhat fun and whimsical. Cars Rallye has a small version of Radiator Springs with some fun queue details to make you feel like you’re traveling through Lightning’s home base. Lightning and Mater are on hand to call out to Rallye riders. Les Tapis Volants is where Genie is filming a scene all by himself. It’s a different take on the copy attraction, and having Genie speaking over the carpets makes it a little more magical.

Animagique Theater hosts Mickey and the Magician. Unfortunately they discourage filming and photographing, and wanting to be a gracious guest I obliged. The show was magical. There were some great illusions. The story featured wonderful characters that don’t always get the spotlight in shows. And it made for the musical numbers to be a lot of fun. It’s a great Mickey show that is worth seeing again and again.

My two favorite attractions at the whole park were in Toon Studio: Crush’s Coaster and Ratatouille: L’Aventure Totalement Toquée de Rémy. Both surprised me in how fun and amazing they were.

The area leading up to Ratatouille was a recreation of what you’d find in the movie. It’s a small Parisian corner heading to Gusteau’s, which serves as the entrance to the ride. A few seasonal booths had some great cuisine to taste. The whole area was incredible to spend time in. Having been in Paris just before going to this park, it took the best of the city and made it a nice place to enjoy.

The ride did an amazing job at being a simulator and actual moving attraction. I knew I’d be donning 3D glasses, but the way to view everything took my breath away at times. It really felt like I moved through the kitchen. And, there were appropriate smells as you go through! It had some slight differences each time of riding because of where you’d sit, and which vehicle you’d be in. 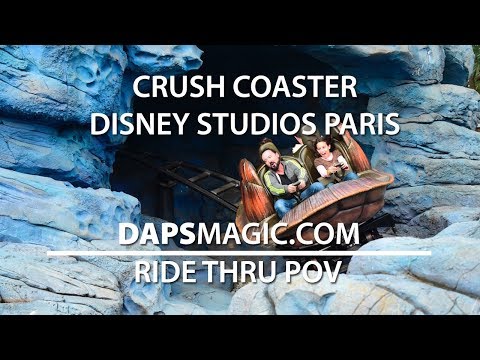 Crush’s Coaster is a seemingly simple spinning coaster, but all the features makes it different from any other experience. You don’t know how you’ll be spinning, but that’s half the fun. The other half is how much goes on in the ride building. Projections, lights, and even a few props makes it feel like you’re traveling on the EAC. Fortunately it wasn’t too sickening to have all this happen. A little disorienting, but in an exciting way. It is now one of my favorite roller coasters anywhere!

Star Wars had a presence at Walt Disney Studios Paris with two shows happening in the main courtyard. Captain Phasma’s First Order March, and A Galaxy Far Far Away happened in both Enlgish and French throughout the day. Phasma’s march worked similarly to the Walt Disney World version where a few stormtroopers and Phasma paraded down a route before stopping at a stage. It was a bit shortened due to the path, but still a very fun show. Galaxy Far Far Away was a little shortened as well here. Not as many characters appeared for it, but many of the fan favorites. Right before it, Chewbacca came out with some yelling to initiate the approaching start of the show.