The highly anticipated new animated series “Marvel’s Spider-Man” will debut with a one-hour premiere on SATURDAY, AUGUST 19 (7:00-8:00 a.m. EDT), on Disney XD, and on the Disney XD App and VOD (12:01 a.m. EDT), it was announced today by Cort Lane, senior vice president, Animation & Family Entertainment, and Joe Quesada, Marvel’s chief creative officer, during the Marvel Animation panel at D23 Expo in Anaheim. During the packed panel, news was also shared about “Marvel’s Spider-Man” voice cast, season three of “Marvel’s Guardians of the Galaxy: Mission Breakout” and an all-new animated special from The LEGO Group and Marvel. 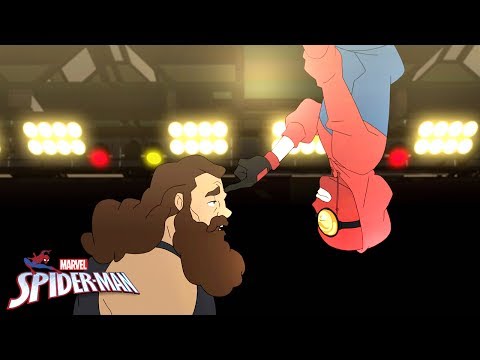 In the new series “Marvel’s Spider-Man,” we will see a fresh take on Spider-Man, as Peter Parker is learning the responsibility that comes along with being a new, superpowered hero in New York City, just as he’s being accepted into Horizon High, a high school for brilliant young scientific minds. He struggles with the duality of his social life at school and hiding his secret identity from everyone including his best friend Harry Osborn, who attends the competing Osborn Academy for geniuses. As Peter embraces his alter-ego and takes on super villains such as Vulture, Lizard, Doctor Octopus and Sandman, he watches his hero lifestyle come between his personal relationships and struggles to keep Harry from landing on the wrong side of the law.

Series stars Will Friedle (“Boy Meets World”), Trevor Devall (“Johnny Test”), Vanessa Marshall (“Star Wars Rebels”), David Sobolov (“Transformers: Prime”) and Kevin Michael Richardson (“The Cleveland Show”), along with Lane and Quesada, announced that the Guardians will return for a brand-new third season on Disney XD titled “Marvel’s Guardians of the Galaxy: Mission Breakout.” The third season will find the Guardians gaining fame and fortune, but quickly knocked back on their heels after being framed by the Collector. The Guardians will travel to new universes, stage a massive sting operation inside the Nova Corps, and expose a Secret Invasion years in the making. A little bad and a little good – all in a day’s work. Check out the aforementioned link for all-new artwork for “Marvel’s Guardians of the Galaxy: Mission Breakout.”**

The LEGO Group and Marvel will team up once again for an all-new 22-minute animated special “LEGO® Marvel Super Heroes – Guardians of the Galaxy: The Thanos Threat.” When Thanos, Ronan, Nebula and the Ravagers seek to possess the Build Stone – a powerful and creative relic – the fate of the universe depends on the Guardians of the Galaxy to protect it. The platform and release timing details are forthcoming.

Marvel Entertainment, LLC, a wholly-owned subsidiary of The Walt Disney Company, is one of the world’s most prominent character-based entertainment companies, built on a proven library of more than 8,000 characters featured in a variety of media over seventy-five years. Marvel utilizes its character franchises in entertainment, licensing and publishing.

Disney XD is a basic cable channel and multiplatform brand showcasing a compelling mix of live-action and animated programming for kids age 6-11, hyper-targeting boys and transporting them into worlds full of humor, unexpected fun and inspiring action-filled adventures. Disney XD-branded content spans television, online, mobile and VOD platforms. The programming includes series, movies and short-form, as well as sports-themed programming developed with ESPN. In the U.S., Disney XD is seen on a 24-hour, advertiser supported network that reaches over 74 million households via its basic cable and satellite affiliates. In total, there are 32 Disney XD channels available in 25 languages around the world.

About The LEGO Group

The LEGO Group is a privately held, family-owned company with headquarters in Billund, Denmark, and main offices in Enfield, U.S., London, U.K., Shanghai, China and Singapore. Founded in 1932 by Ole Kirk Kristiansen, and based on the iconic LEGO® brick, it is one of the world’s leading manufacturers of play materials.

Guided by the company spirit: “Only the best is good enough,” the company is committed to the development of children and aims to inspire and develop the builders of tomorrow through creative play and learning. LEGO products are sold worldwide and can be virtually explored at www.LEGO.com.

For more news from the LEGO Group, information about our financial performance and responsibility engagement, please visit http://www.LEGO.com/aboutus.

*COPYRIGHT: © 2017 Marvel & Subs. All rights reserved. All photography is copyrighted material and is for editorial use only. Images are not to be archived, altered, duplicated, resold, retransmitted or used for any other purposes without written permission of Disney XD. Images are distributed to the press in order to publicize current programming. Any other usage must be licensed. Photos posted for Web use must be at the low resolution of 72dpi, no larger than 2×3 in size.

Caitie Bear originally came to DAPS MAGIC through GEEKS CORNER and coffee. She soon became the resident coffee consultant for special segments before finding herself joining the GEEKS CORNER team. She is now the co-host for the web show and has loved the opportunity to share the magic with other Disney fans. Caitie loves covering anything food or Disney Fairy Tale Weddings!