Check, Please! Arizona is one of the most popular locally produced programs on Eight, Arizona PBS. And Eight will again transform CityScape into a haven for food adventurists, a one-stop exploration of Arizona’s independent restaurant collective that ranges from every-day hamburger haunts to five-star gourmet establishments.

In its third year, the event is crowned with a gathering of Arizona’s James Beard Foundation award-winners, among them, Emmy Award-winning host of Eight’s Check, Please! Arizona Robert McGrath, plus Christopher Gross, Chris Bianco, and Nobuo Fukuda.

In addition, as Arizona’s culinary scene continues to advance in global sophistication, the 2015 version of the event will also showcase overlays by Arizona’s chef talent, including a second panel of top Valley chefs, in addition to a lineup of cooking demonstrations by local chefs on two stages, provided by SubZero/Wolf, and a tour of favorite wines by Chef Christopher Gross, including tastings and tips for food pairings.

The festival also will be adding several new restaurants to the lineup this year from Check, Please! Arizona’s five seasons on-air, as well as featuring many returning favorites, to date including:

Jewel of the Crown

TICKETS. Tickets are available at www.azpbs.org/checkplease/festival. General admission in advance is $79; at the door tickets are $89. Tickets include food, wine and beer sampling as well as panel discussions, cooking demonstrations and guest lectures. NOTE: Last year, the event sold out. 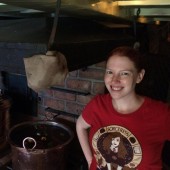 DC Sarah has been writing with DAPs Magic and Geeks Corner since 2009. Not only is she a Disney lover, Potterhead, Batman Fangirl, and Social Media Junkie, but she is also the resident Foodie, and has her own site, Geeks Who Eat.