On Tuesday, November 5, 2013, Disneyland Park hosted an event celebrating the magic of social media by inviting “Social Media All Stars” and their fans who were lucky enough to win tickets.   These stars come from all over the internet, including YouTube, Instagram, Pinterest, Vine and even individuals that became famous over one photo that later became a “meme.”  Together, all of these social media stars have a total of 2 billion views! This event was mostly organized to officially begin the newest Disney promotion, which is showing your “Disney Side.”

Each one of these social media stars found unique and creative ways to show their own Disney side.  Some of them covered Disney songs for their YouTube channel, while others created hilarious Vine videos about their adventures at Disneyland.

Guests that were invited to this event were treated with a free pair of Disney mouse ears to help show their Disney Sides. Next, they made their way to Fantasyland Theater to view the premieres of the newest videos, photos, vine posts, and memes from these internet stars.  I especially loved the Grumpy Cat video!

The Social Media All Stars arrived through Sleeping Beauty Castle, accompanied by Mickey and friends. Our host came out to introduce the Social Media all stars and premiere some of their newest videos and photos. Tiffany Alvord performs her cover of “It’s A Small World After All” and premiered the music video on this event. “Realitychangers” Jorge and his daughter perform their cover of “You’ve Got A Friend In Me” This is where the social media stars had their meet and greets. They posed for pictures with fans and had interviews with the press. I was extremely excited to meet the most famous feline in the internet, Grumpy Cat! There she is! Grumpy Cat! I tried making a grumpy pose but I almost couldn’t because I was too excited to meet this kitty.

Here is a full list of the Social Media All Stars, courtesy of the Disney Parks Blog.

Visit the official Disney Parks YouTube channel to view videos from many of these popular online stars. Here are a few photos from Tuesday’s event which feature some of these Social Media All Stars.

So, how do YOU show your #DisneySide? 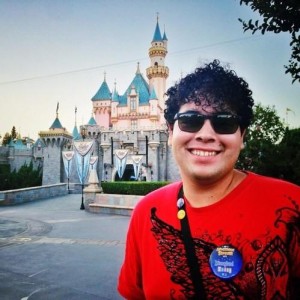