Things started almost two weeks when we were sent an email inviting us to this presentation at the Walt Disney Studios to see what D23 has in store for the coming year. Most of this information was already public so it really didn’t seem like it would be a huge deal. There was one intriguing thing though, the email said there would be some special surprises at the end of the presentation. After responding and confirming attendance, it was made clear that it would be a good idea to bring a camera and small video camera. This definitely raised some eyebrows and curiosity was aroused.

The date of the event, December 1, finally arrived. A small group of online media arrived at The Walt Disney Studios to see what D23 had in store. The event began at 12:30 PM with everyone meeting in the lobby of the Frank G. Wells building,

right outside the door to the archives. After a brief explanation about some of the displays in the lobby, people were set loose to explore the lobby and take pictures. Minutes later, everyone was moved into the Walt Disney Archives to explore and take photos. Finally D23 head, Steven Clark, got things rolling and introduced the head of the Disney Archives, Becky Cline. She went on to share several historical pieces from Steamboat Willie, Snow White, Dumbo, and the original Mickey Mouse Club (before it was a TV show). She also showed an Academy Award Oscar for “Best Documentary Feature of 1958” White Wilderness. After taking pictures with the Oscar it was time to head to the theater in the Frank G. Wells building.

Once inside the theater it was quite apparent that this really was a small group. After a brief introduction of all the people in attendance, our hosts Tim O’ Day and Steven Clark began the informal presentation with a recap of the events from the previous year that D23 had hosted. From the D23 Expo to the Sip and Stroll events, it was clear that a lot of fun was had by D23 members last year. It was also clear that they are learning from their events and making changes to improve on them. Yes, this means that those of you who were frustrated with the D23 Expo’s long lines and other issues will be in for some pleasant surprises in 2013.

After seeing the last year of D23 events, it was time to look forward to 2012. Showing that D23 is learning from each event, there were several positive changes in the schedule this year. For one, most events will have more capacity and opportunities to attend. A prime example of this is the additional number of dates for tours of The Walt Disney Studios. This popular event is limited by the number of people that can comfortably hear/follow a tour guide and how many tours can be going around the studios at once. Because of these limitations, more dates have been added to the calendars so that more D23 members can be a part of this event. The presentation also included a look at the Smoke Tree Ranch Roundup event, movies that are 50 and Fabulous and also From the Vaults, Destination D: 75 Years of Disney Animation, the Journey to Marceline, the Fanniversary Celebrations, and several more events that will be explored in an upcoming post. To boil it all down, D23 has a lot coming in D23 that members are going to love!

At the conclusion of the presentation, it was time to go outside for the very special surprise. This was the time for video cameras to come out, however regular cameras were not permitted. Once outside the surprise was indeed something very special. For there posing for a picture was a group of Disney dignitaries from many different areas of the Walt Disney Company. This list of luminaries were as follows:

Those online media in attendance were invited to take out video cameras and film this historic photograph of a group with over 500 years of Disney service combined. After the picture was taken, the group of online media journalists were invited to join this historic group for another picture. Once the picture was taken, everyone was invited back inside to the second floor of the archives for a reception.

The reception was the highlight of the day for all who attended. People mingled, talked, enjoyed each other, and were able to just spend unscheduled time with some of the Disney greats. During this reception, Richard Sherman also played on a piano sitting in the corner. This piano was the piano that was owned by Walt Disney and sat in his office. It was the very same piano that Richard Sherman played when he originally met Walt Disney so many years ago. He played Feed the Birds and Supercalifragilisticexpealadocious from

Mary Poppins initially. A short time later he returned to the piano and played Chimpanzoo, a song that was written but not used in Mary Poppins. During the reception pictures were taken, food was enjoyed, but most of all conversations were had. This intimate small group experience with some of the greats of the Walt Disney Company allowed this group of online media journalists to connect in a way that normally wouldn’t happen. These people are famous both inside and out of The Walt Disney Company but they are also ordinary people with families of their own. A kinder group of people would be hard to find as well.

The afternoon at The Walt Disney Studios was simply magical. It was a simple event that was loaded with pixie dust. These are the kind of things that are going to make D23 events so memorable. There are a lot of exciting things coming down the line from D23 and with each of these events, D23 will be looking to add a healthy dose of Disney magic for the members who are involved. As for this event, more will be written about it you can be sure. In the coming days specific posts will be written about the various elements of the day.
Here are three videos from this amazing day: 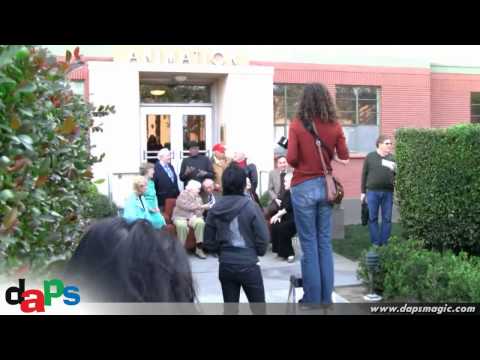 If you would like to see up to the minute updates from Mr. DAPs you can follow on twitter at: www.twitter.com/mrdaps (@mrdaps). More information can be found about upcoming D23 events at: http://d23.disney.go.com/events/